Oops!  It happened again, I haven't posted since the end of September... 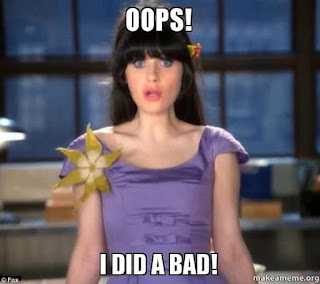 So lets have a look and see what I managed to sew in the last almost-four months.

The first thing I made after the red suit from the last post, was a Swirl dress.  For this one I used some adorably kitschy fabric featuring kitchen equipment. 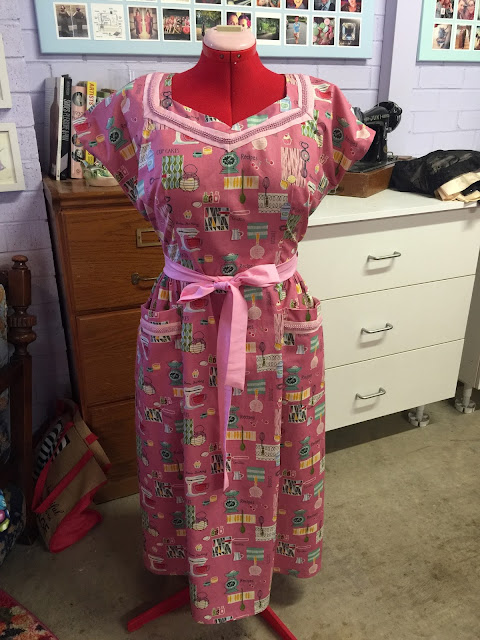 Swirl dresses are such cute and comfy dresses!  Oh, and I am now selling my Swirl dress pattern on Etsy!  You can find it here.

After that dress, I made a circle skirt dress inspired by something I saw on Gertie's (of Gertie's New Blog for Better Sewing) Instagram.  The detail I liked was the idea of reverse facings - where the facing is pressed to the outside and becomes a feature. 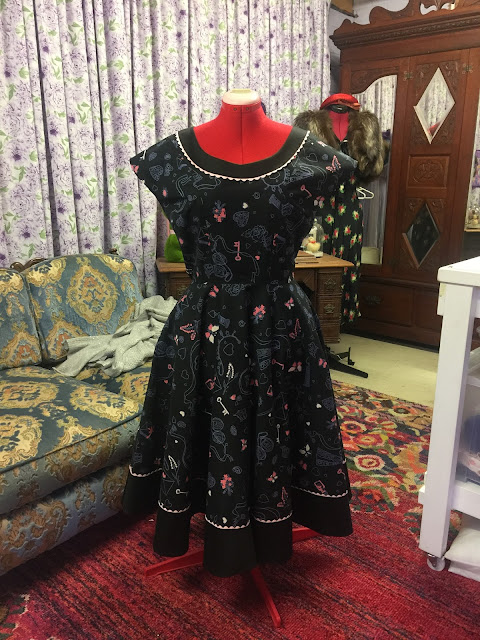 I did intend to do a tutorial on this technique, but life keeps getting in the way.  But it still may happen - I have another one of these dresses cut out and ready to sew, so you never know.

And here is a photo of me wearing it! 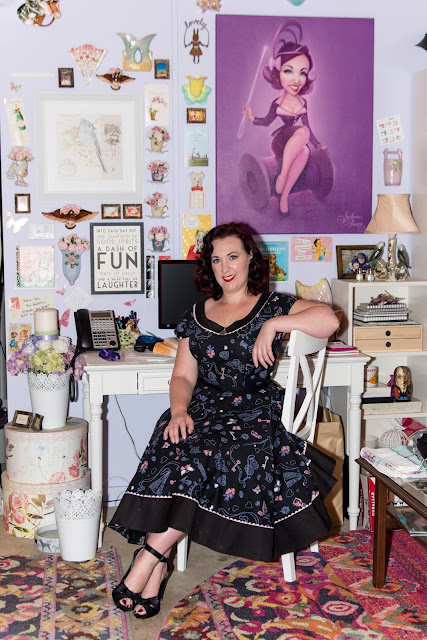 My lovely cousin Mandy came to visit and since she's a photographer, she wanted to take some photos of me in my element.

Next up was my Melbourne Cup dress, and for this one I tried something different - sewing knits! 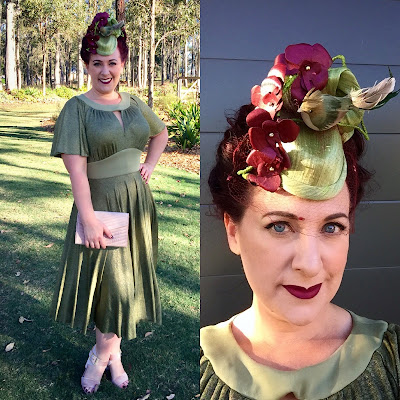 During this experience I discovered that knits aren't any where near as scary as I thought they would be!  And better yet, if you don't want to hem it (or don't have time) you don't have to!

I then had more fun with knits, sewing a bodysuit for a photoshoot from stretch lace and powermesh. 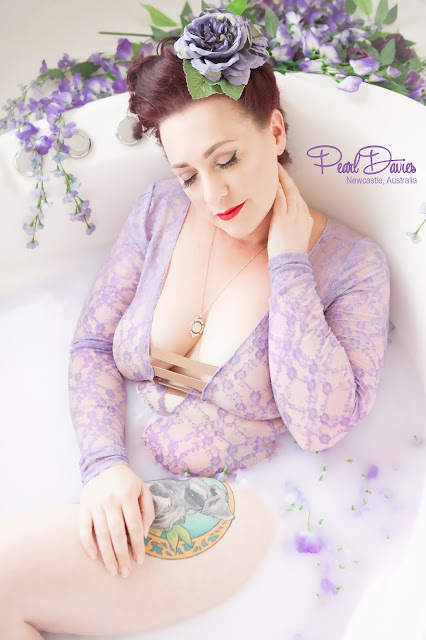 This photo was taken by the talented Pearl Davies who splits her time between Australia and the US.  I love how soft and gentle and peaceful this photo is.

After that I had one more rush project to do for the Sherbet Birdie Candifornia Pool Party - and since it was held in December I went with a Christmas theme. 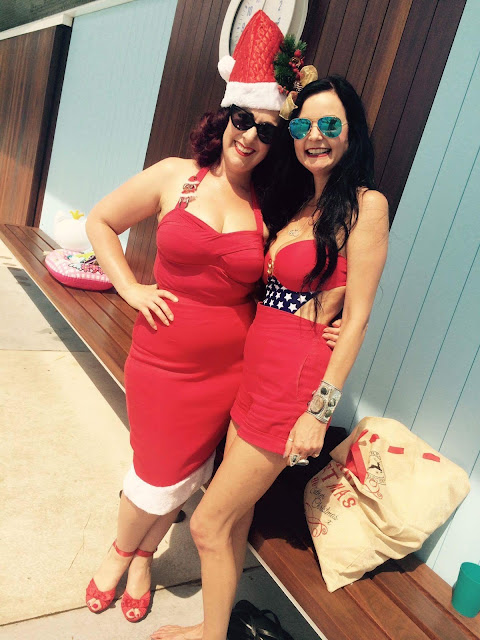 I made the skirt from some scuba knit and fluffy fake fur, and I made the Santa hat (well, made it by hot-glue-gunning a bunch of things together, but that still counts!)

By then I realised that Christmas was coming and I needed to get a move on with my Crazy Christmas Dress.  These always end up being bigger than Ben Hur and I was still hand sewing sequins on late at night on Christmas Eve.

But it was worth it! 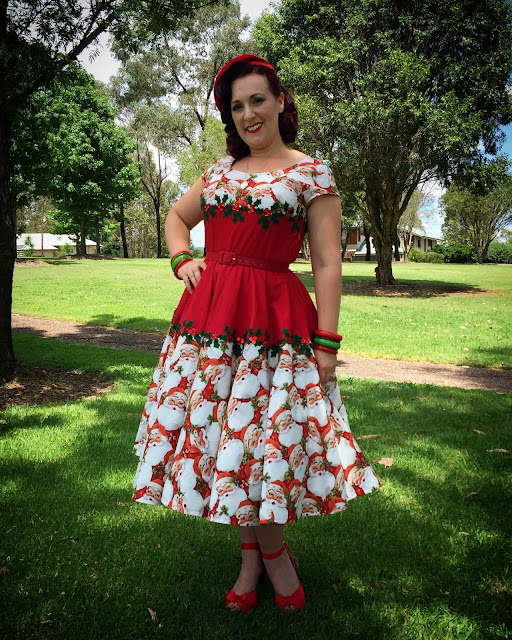 Just in case you can't tell, the holly leaves are hand made felt appliques, and there are red felt holly berry appliques topped with sequins and beads.
Yes, I know, I'm insane. 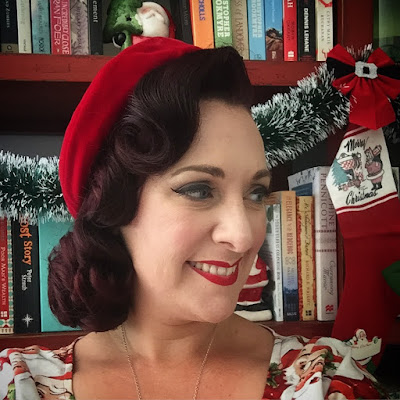 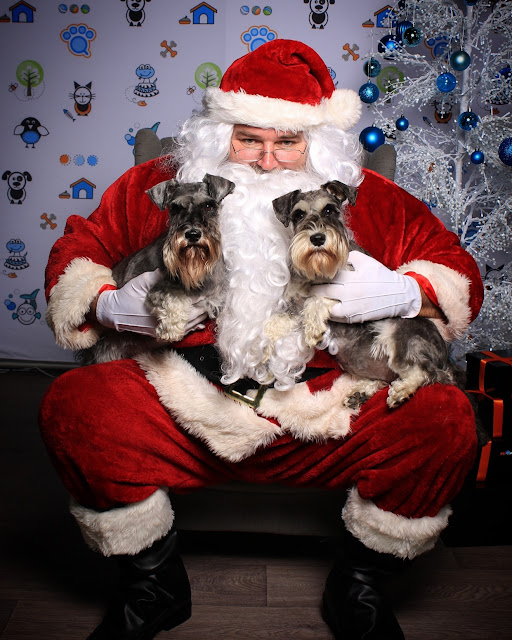 So far this month (January), the heat has set in (41C / 111F) so I've been doing not much of anything.  I did transform a hideous muu muu that I bought at a cheap shop into a much more wearable skirt.  The dress was $15 and I can't buy that much rayon fabric for that! 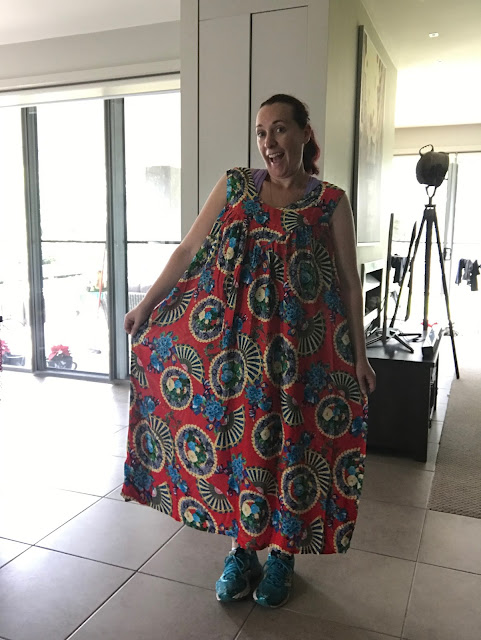 I'm fresh from the gym, hence the running shoes.  However, please note they match the dress! 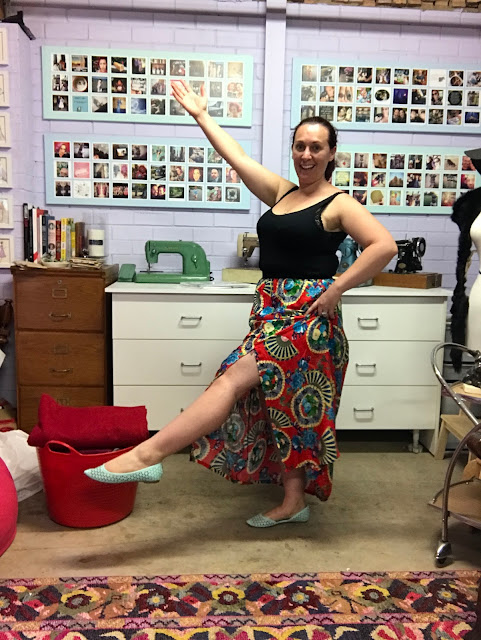 There is another secret project that I can't talk about just yet (shhhh!) but I will say that I didn't think it would suit me and I was pleasantly surprised that it does!

I am currently working on turning a lovely vintage Indian sari into a dress fit to wear to an Indian wedding on Valentines Day.  Here is the sari I'm using: 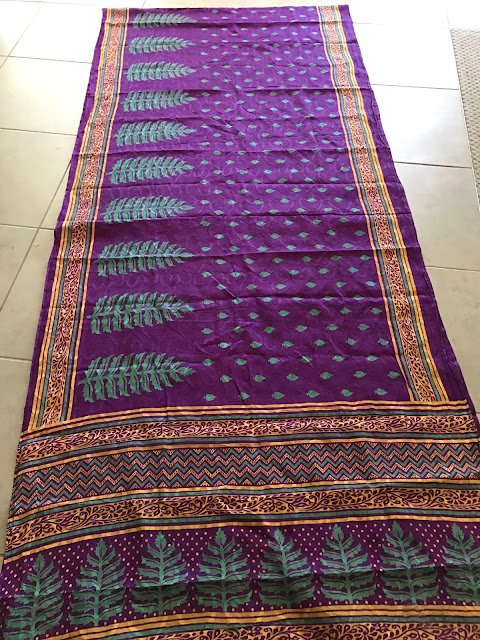 There is lots of hand beading and sequining and adding-of-trim to this one!  Here's hoping I get it done in time to wear it.

I will try my hardest to do better and blog at least once a month.  I have so many plans of beautiful things to sew this year - long term projects with lots of hand detailing - so heres hoping I get to make them.