A Pretty Dress for a Day at the Cricket

Every year my husband attends the 5 day cricket test match at the Sydney Cricket Ground.  Day three of the test is Ladies Day, also called the Pink Day, because the idea is that everyone wears pink and donates to the McGrath Foundation - a breast cancer charity.

I like to make an outfit every year for this special day.  Last year I made one, and had my own tea party because I wasn't well enough to attend the day (you can read about it here).  This year I wasn't really sure if I'd be going, but I thought I'd make a dress anyway.

I had recently purchased some amazing vintage rayon fabric, and some of it was pink with the best novelty print of ladies wearing fabulous hats. 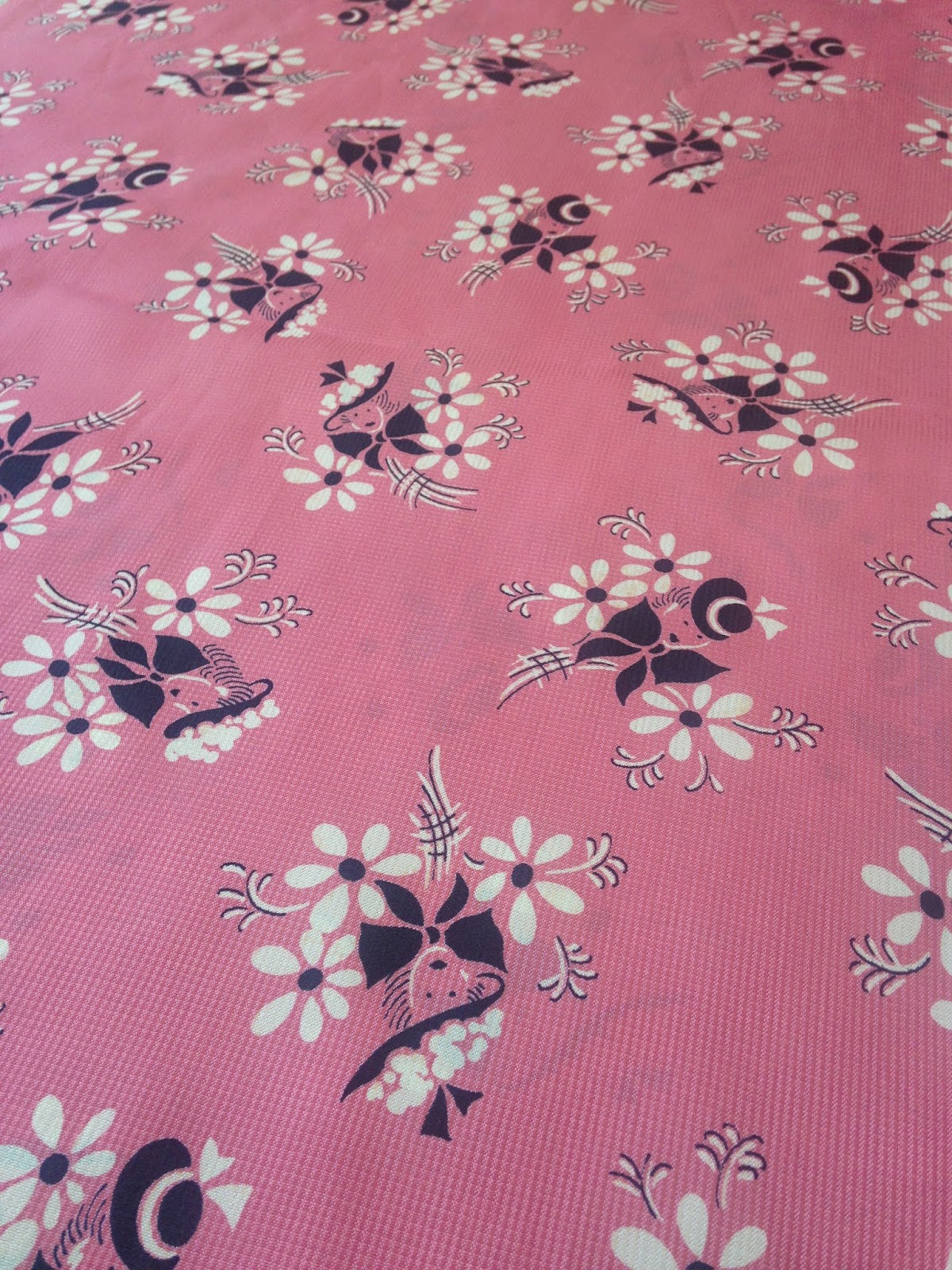 I had also recently received some reproduction patterns from Eva Dress (if you haven't looked at their website, you should!).  This dress pattern seemed like just the thing to wear on a hot summer's day. 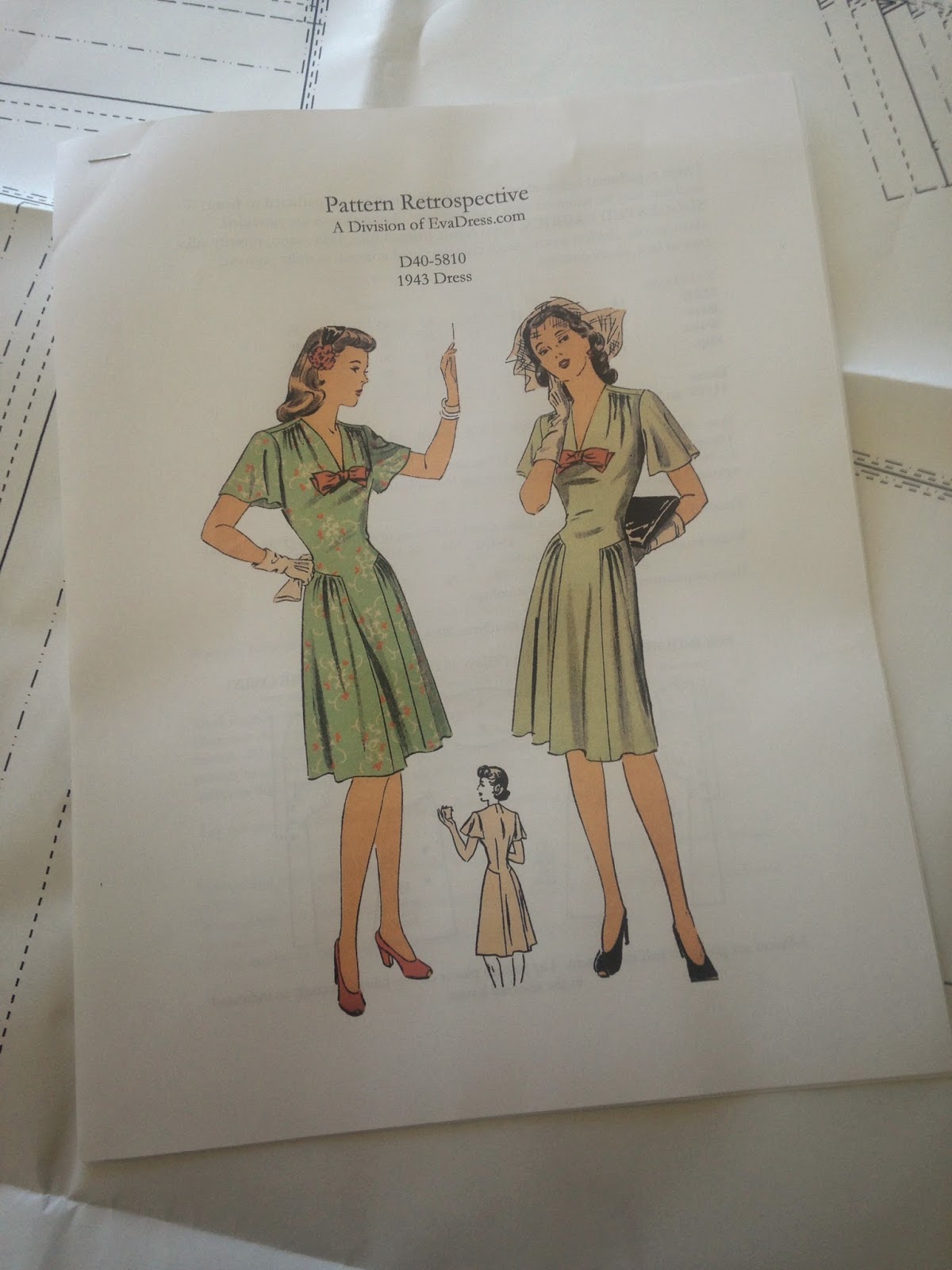 My fabric, being vintage, was narrow, and by the yardage chart on the pattern, I didn't have enough, but only just.  Sigh!  I started out by laying my fabric out on the floor and seeing if I could make the pattern pieces fit. 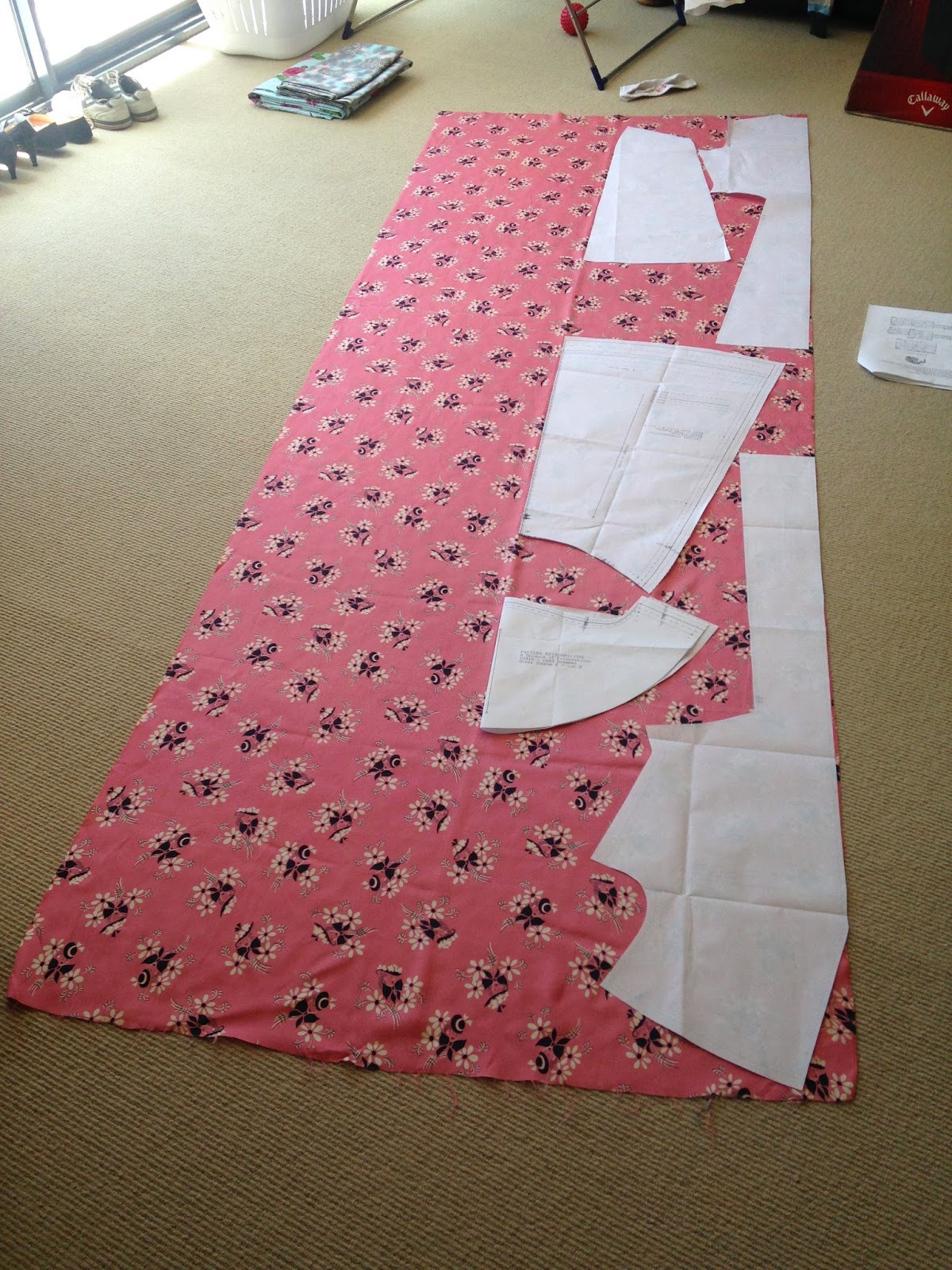 Its like a giant jigsaw puzzle!  It took me quite a few goes to find something that worked.  I even tried the layouts included with the pattern - and I never do that!  I eventually found the winning combination, and it meant having a seam in the sleeve.  And I couldn't match the pattern either, so I just hoped that the fullness would hide it all. 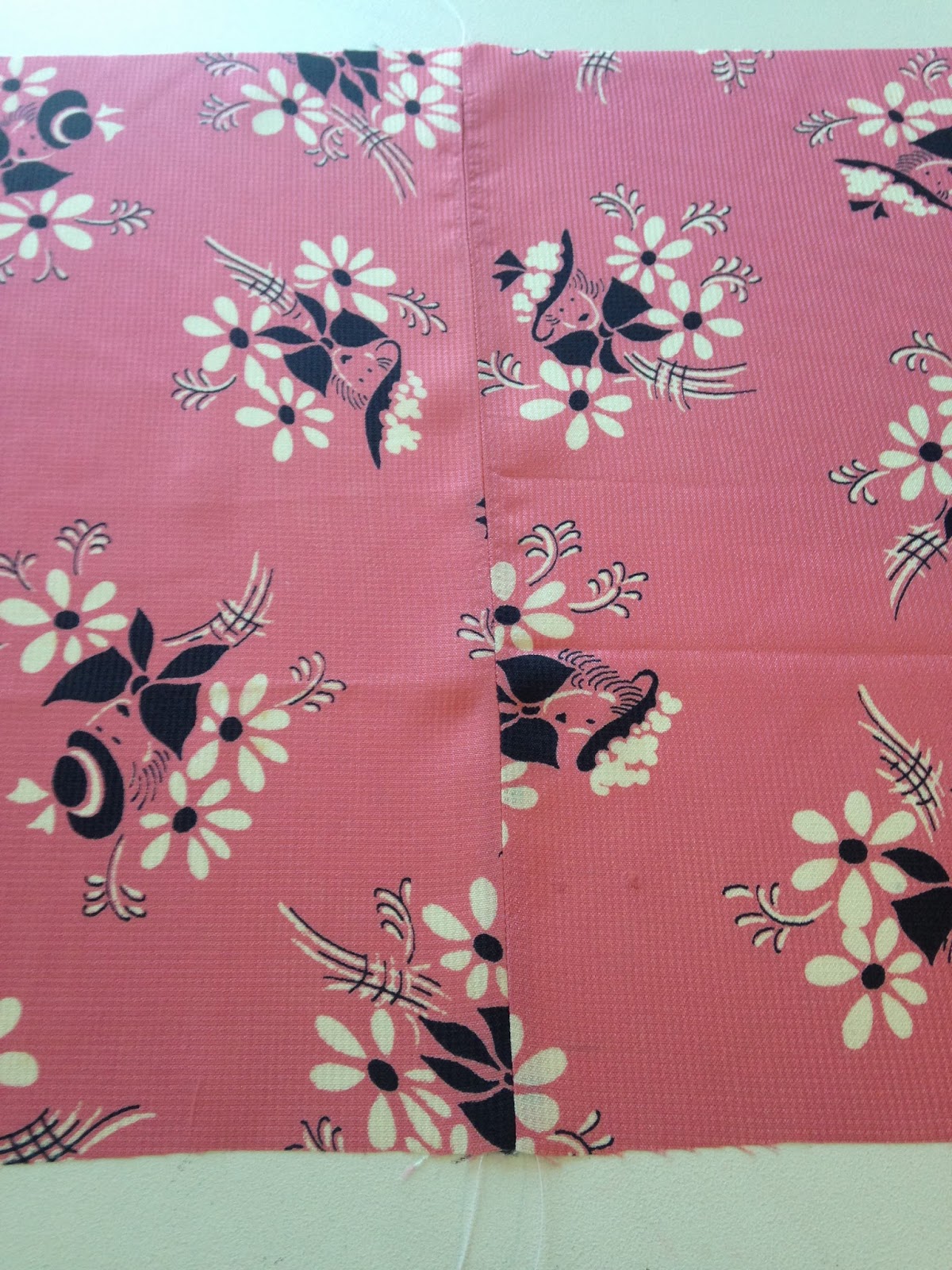 Construction of this dress is so amazingly straight-forward!  Almost too simple - and I started to worry that without darts at the waist, it would look like a potato sack. 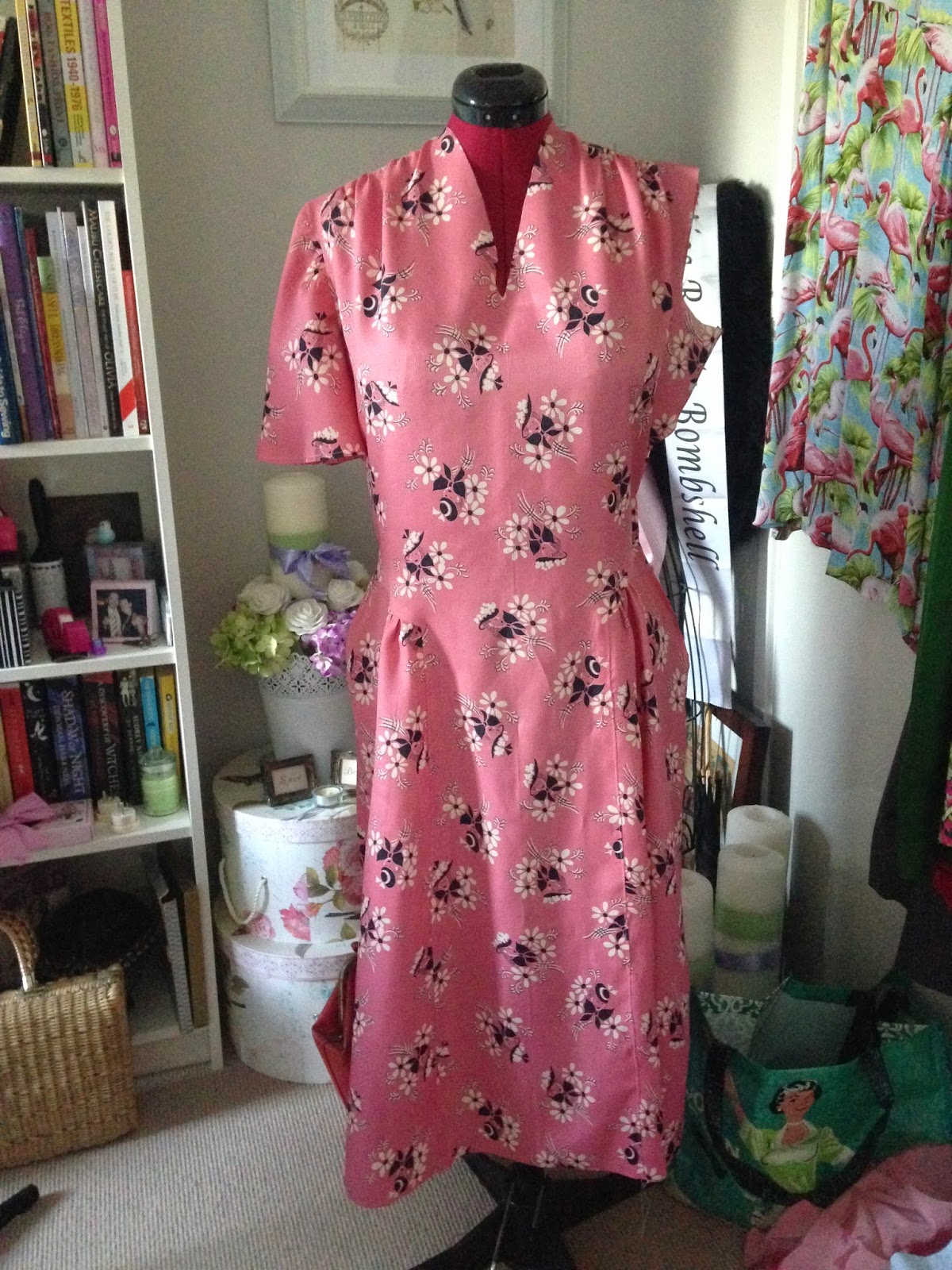 But the response on my facebook page was to trust the pattern and keep going.  Apparently a lot of 40s dresses look like sacks on hangers but look magical on.  I own lots - how had I never noticed!!!  And worst comes to worst I could add darts in when it was all finished anyway...

The last big decision was the bow.

To bow or not to bow.  That was the question.

The dress sat on my headless helper for a good week and a half while I tried to make a decision.  Eventually I realised that it was part of the pattern for a reason, so I should make it and pin it on and then see what I thought. 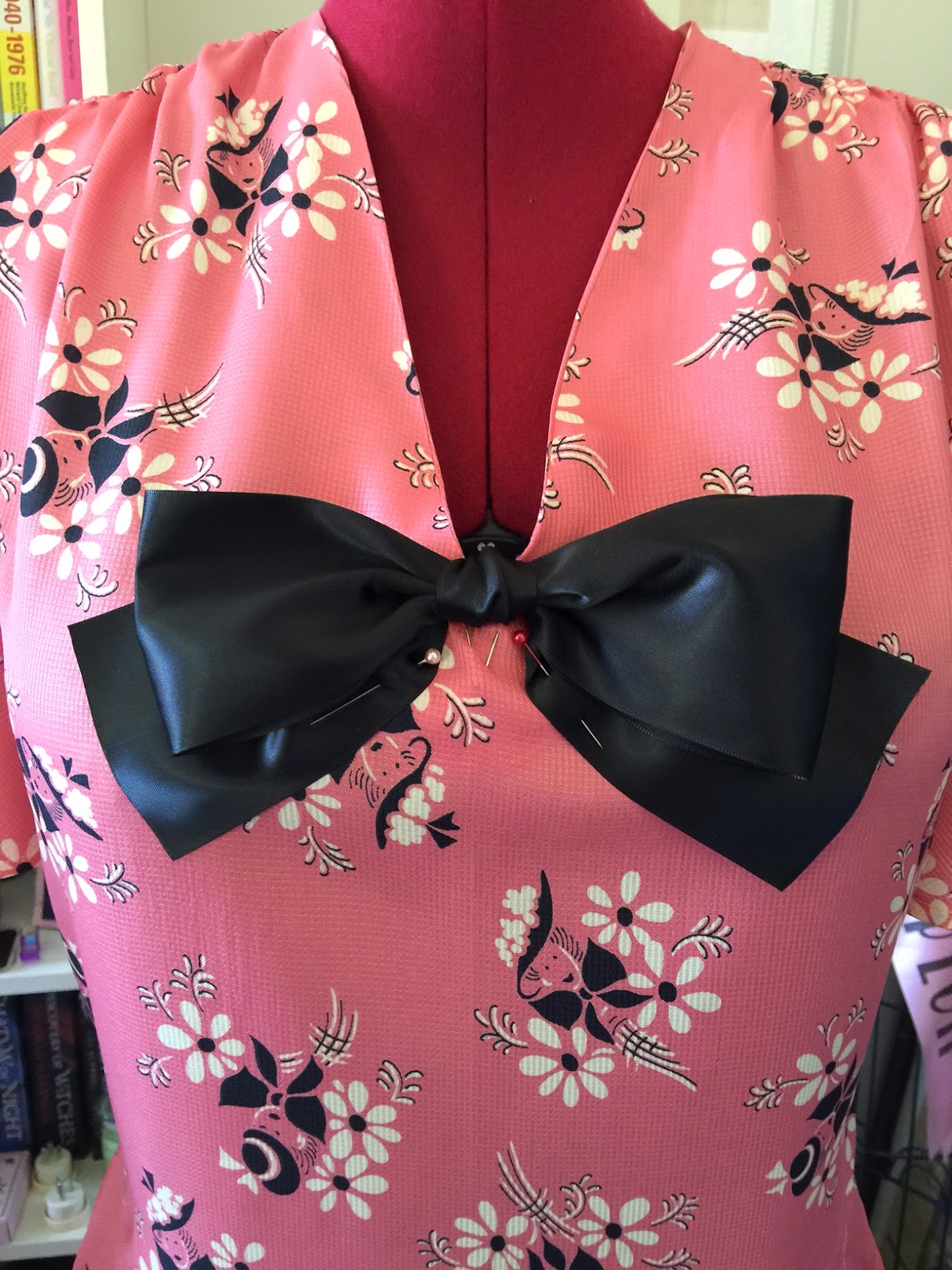 The decision was a resounding YES!  Without it the dress seemed unfinished, but with it, it sang.

So I finished off the hand sewing and wore it to the cricket! 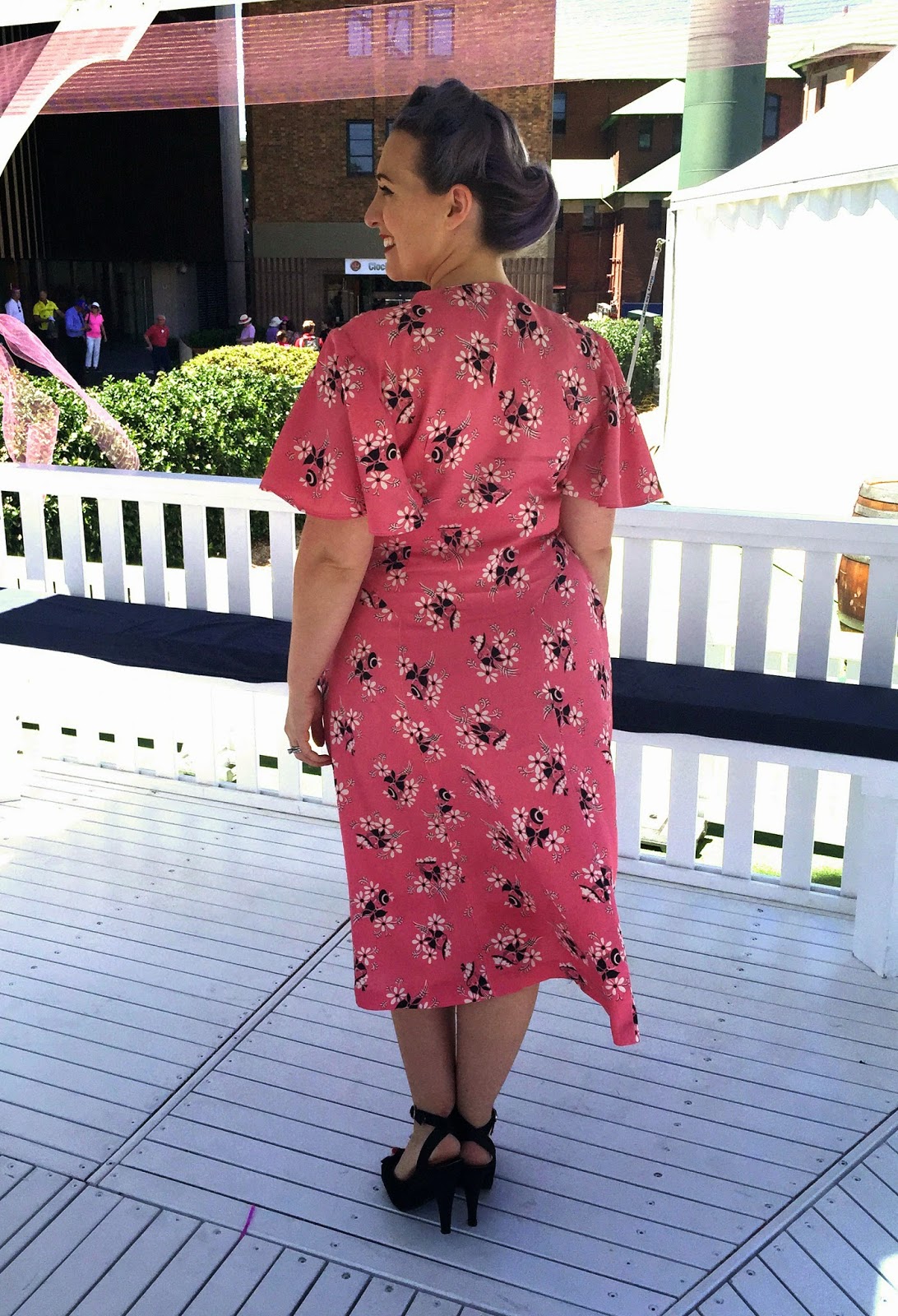 Steve is a member of the SCG IX, which is a special club within a club for members that play cricket for the SCG.  Each year we have a special area - and this year it was a fabulous white summerhouse with a view of a big screen and right by a bar.  The only thing it was missing was a jacuzzi!!!  It was a lovely place to sit, and I felt lovely and glamorous all day! 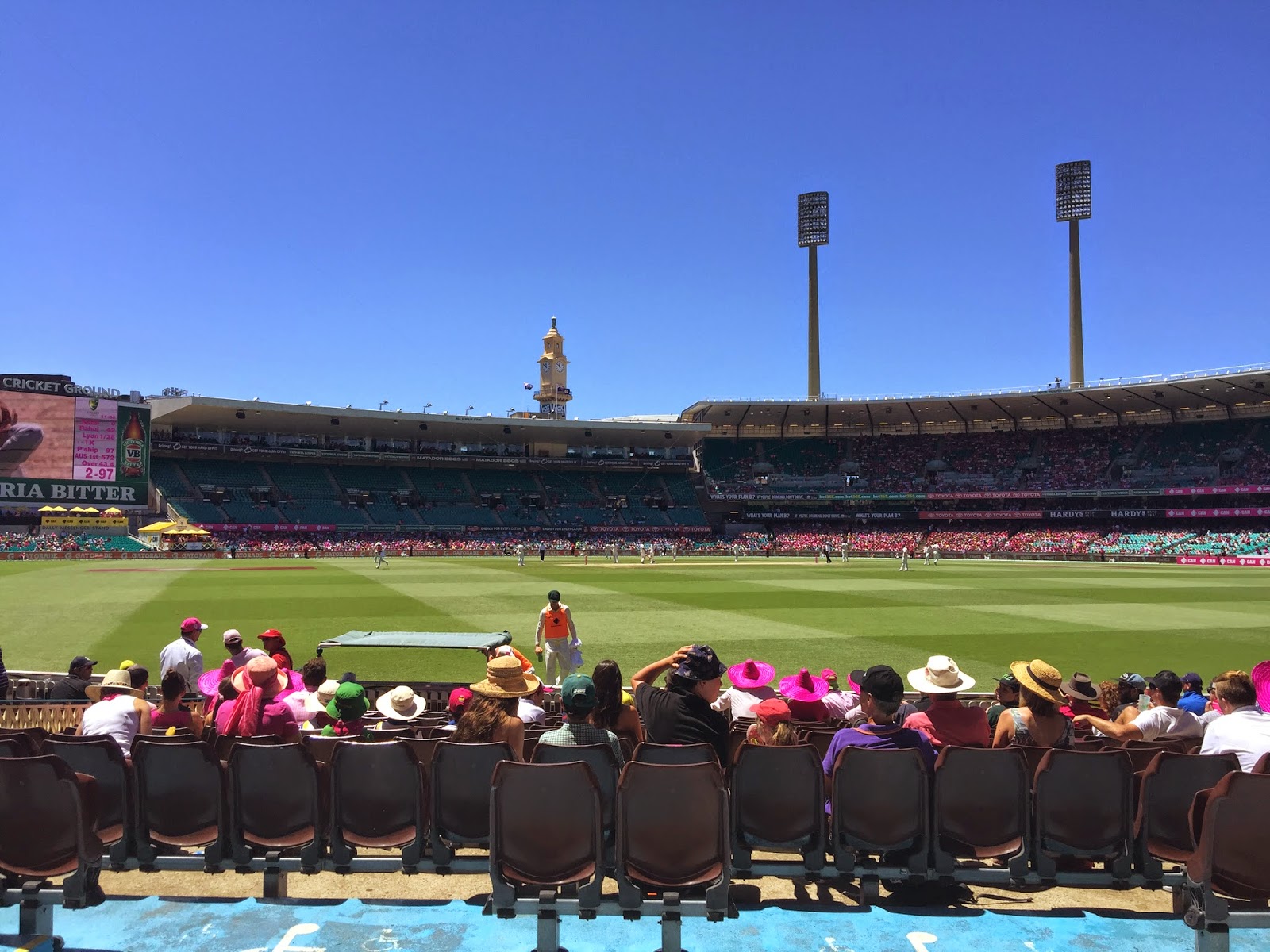 Yes, I did actually watch some cricket...  I didn't just socialise.

Its lovely to see so many people get involved for this cause too - I didn't see one person NOT wearing pink, and so many people go to a great deal of effort with their outfits.  I met the son of a friend who was really my kind of person - I mean, just look at his hat! 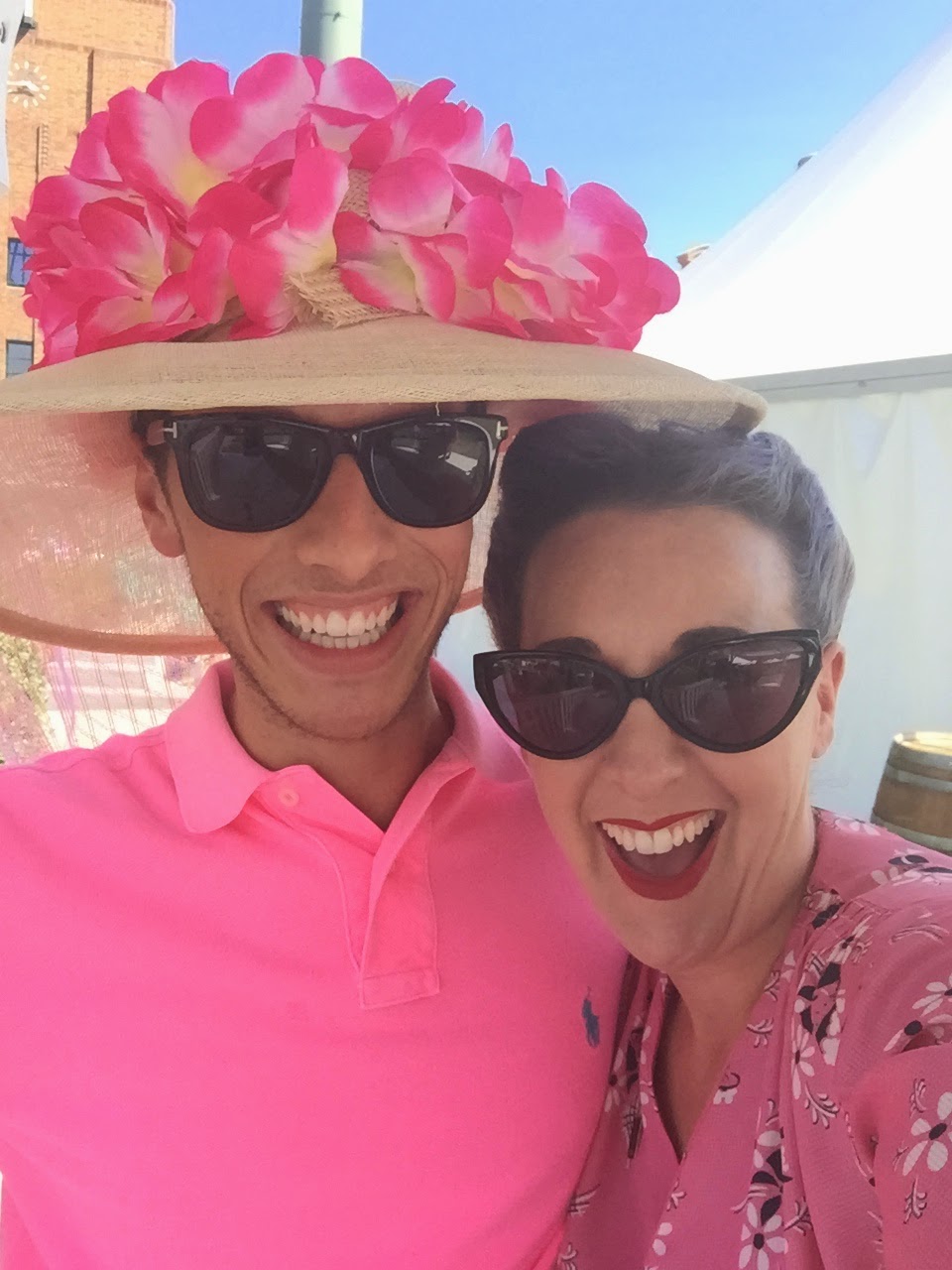 I had a great day, and this dress ticked all the boxes - pretty and elegant, easy to sew, and comfortable to wear.  I can see at least two more of these in my future!

How about you?  Tempted to sew yourself one?

When my last sew-along finished, there was much talk in the Swirl Facebook group about holding another one.  It didn't take much to convince me - I had had as much fun as everyone else I think!  (By the way, if you want to have a look at the round-up post you can find it here).  Rather than doing it all on my own, this time I decided to team up with Decades of Style, an online vintage reproduction company specialising in patterns from the 1920s through to the 1950s.

I don't know if you've looked at their website, but I remember the first time I did I wanted to buy just about every pattern.  Let me tell you, narrowing it down to just one pattern for this sew-along was nigh on impossible!

After much debating with myself, I chose this gorgeous 1930s capelet pattern: 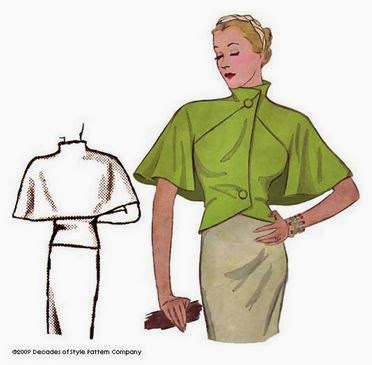 Look at it!  It doesn't get much more elegant than that!

Here is a vintage example I have dreamed of recreating since I first saw it.  This one was sold by FabGabs on Etsy: 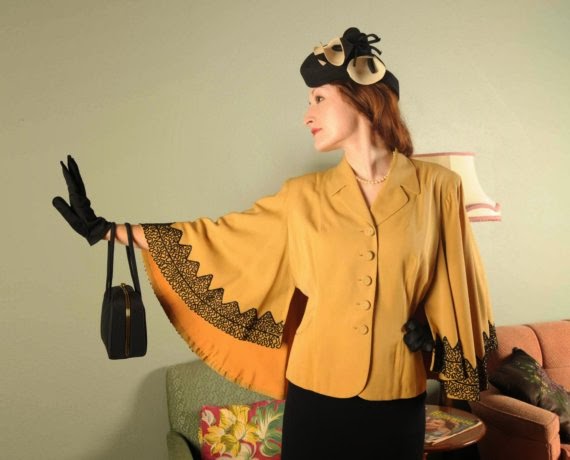 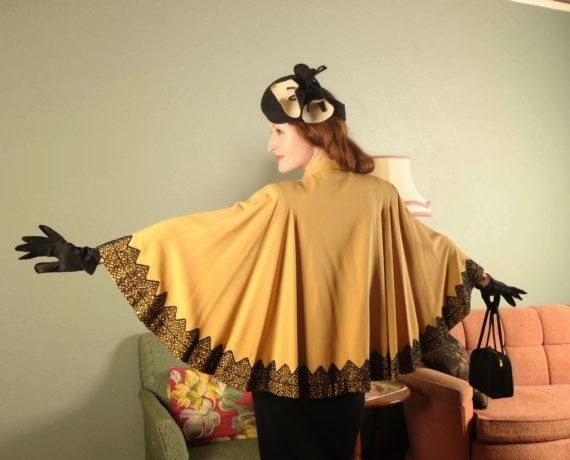 So this is what I'm aiming to do with mine.  And yes, I am going to tell you all the adjustments I make so you can do it too!

And the best thing is that Janet from Decades of Style is giving my lovely participants a 20% discount on the pattern!!!  All you need to do is use the code CAPE20 when you check out.  The code is valid from now until the end of January.

Now, Janet also told me that international postage (she is based in the US) is quite pricey.  For the price of posting one pattern, Janet can post up to 100 patterns.  So I figure you have two options:
The Facebook group (which is now called Sew Retro Rose's Lovely Ladies) will be talking and sharing about this pattern too (amongst other stuff sewing and non-sewing related - they are a friendly bunch!) so if you would like to join, please comment below with your email address and I will send you an email invitation to join.  This group would be the perfect place to meet other people in your country that you could share shipping with.  If you aren't comfortable with leaving your email in the comment, please send me an email at sewretrorose (at) gmail dot com.

This sew-along won't start until the 1st of February to give everyone time to get the pattern and their fabric.  Please note its important with this one to make a muslin, so make sure you have something lying around that you can follow my first post with (that will be all about making your muslin).

Here is another link to the pattern.

I hope you like my choice of pattern, and that you are going to join me on this sew-along!