A project totally out of left field...

... and totally not from the 1950s, but its still sewing, and exciting, so I thought I'd talk about it here.

This coming weekend Steve and I have been invited to a fancy dress cocktail party with a moulin rouge theme. We won't know ANYONE at this party (long story) so I thought I would go all out with my outfit... like I wouldn't have gone all out anyway!

So, I have this corset that I wore at Miss Pinup Australia NSW Finals last week: 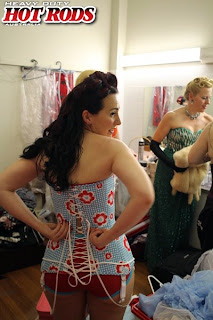 
I thought the custom made corset by Jill's Corsets would be a great foundation for a moulin rouge inspired cancan outfit. To that I imagined adding a cancan skirt, and a big feathered head piece. Due to the NSW Finals of Miss Pinup Australia being the weekend before, I really wasn't going to have a lot of time to make this all happen. I looked around at buying a skirt and I couldnt get anything in the colours I wanted, or the look I wanted. The head piece was much easier - Feathers custom make showgirl head pieces in whatever colours you want! Done!!

Back to the skirt - I realised I was going to have to make it, so I started looking around for a pattern, and of course I couldnt find what I wanted. I did find this which gave me a huge hint on ruffles, but more on that later.

So, for the first time, I was going to have to make it up as I was going along!!!! This might scare a lot of people, but not me - chuck me in at the deep end and watch me swim!

I started with the outer skirt, which after a bit of draping and pining, looks like this: 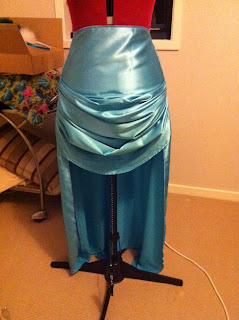 Remind me not to attempt to put zippers in satin again - it wasn't fun, but I will live with the fact that its not perfect because it will be hiding under my corset.

Next step was to make the inner skirt (from bemsilk lining). Its the exact same size as the long bits of the outer skirt. The inner skirt is the bit I was going to attach all the ruffles to.

To make the ruffles, I cut 10 strips of fabric (more bemsilk lining) from selvedge to selvedge, then overlocked the selvedge edges together to make one LOOOONG strip, then I overlocked down both sides of the strip to stop it from fraying. Here is where the ruffling hint comes in.

Did you know that if you make your stitch length and tension maximum on your machine (and maybe give the top thread a bit of a hand by holding it tighter) your sewing machine will create gathers for you!!!!!!! 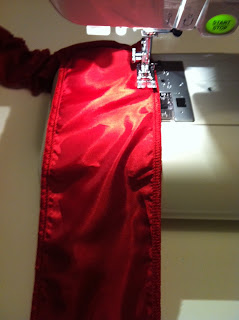 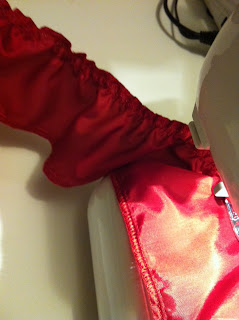 And at 1am I also discovered that your overlocker can do exactly the same thing!!!! Its amazing how brave and creative you can be at 1 o'clock in the morning!

So then I stitched the ruffles on in alternate colours. This took a while... 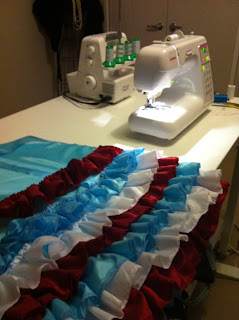 Once all the ruffles were on, I stitched the inner skirt into the outer skirt. This was when something happened that I hadn't anticipated. Even thought the inner skirt and the outer skirt were exactly the same size, the inner skirt hung lower because it had extra weight on it from all the ruffles. This meant that I had to break out the overlocker again and make a satin ruffle to sew to the bottom hem of the outer skirt to make it longer. Phew - almost there! By this point Stella was looking at me wondering if we were ever going to go to bed. She had given up sleeping on my petticoats and had decided to just stare at me instead. Yes Stella, Mummy is mad.

So I sewed the satin ruffle on and VOILA!!!!! THE CAN CAN SKIRT WAS FINISHED!!!!! 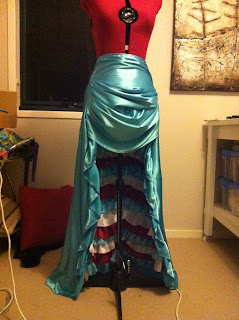 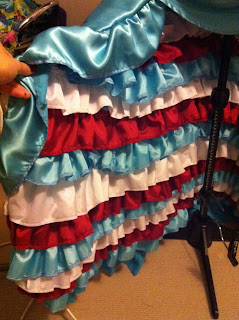 Looks pretty doesn't it? You will have to use your imagination and put the whole outfit together because by the time I finished (1.30am) I did not feel like parading around the house in the outfit just to see what it looked like. I'm sure you will understand.

I found this project a wonderful creative outlet and a good test of my sewing skills and ingenuity. Now I need someone else to have a moulin rouge themed fancy dress party so I can bring the whole ensemble out again, as I'm sure it will be a hit on Saturday night!

Email ThisBlogThis!Share to TwitterShare to FacebookShare to Pinterest
Labels: randomness

A new hat! Plus an update on the Green and Pink dress 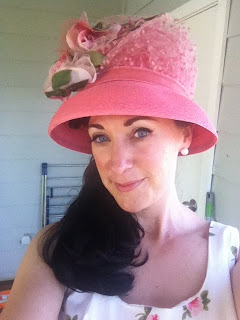 By some amazing coincidence I actually wore the Sheet Dress to work yesterday, and this hat was intended to be worn with that dress! The colour of the hat works perfectly with the flowers on the dress don't you think? I can't wait to wear the whole ensemble somewhere! All I need now are pink shoes and a pink bag. Pink shoes seem to be the more difficult bit at the moment... all the shoes I see are just not quite the right shade!

Also, I finished the Green and Pink dress on the weekend too, and wore it out to dinner on Sunday night. I don't have a picture of me wearing the dress yet, but I'll get that taken care of soon enough. Here is a photo of it on my dressmakers dummy: 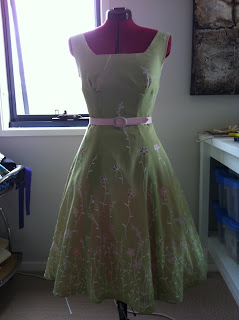 I'm pretty happy with the end result, although I must tell you there were times when I wanted to throw it out the window, or set fire to it. The sheer green fabric with holes in it was a NIGHTMARE to sew for a beginner seamstress, but I perservered and we got there in the end. I also have a lovely vintage hat to match this dress so now I need to find two events to which I can wear a hat!

Have a great day everyone, thanks for reading

Email ThisBlogThis!Share to TwitterShare to FacebookShare to Pinterest
Labels: pink and green dress, sheet dress
Newer Posts Older Posts Home
Subscribe to: Posts (Atom)
Sew Retro Rose is my little corner of the web, where I talk to anyone who'll listen about my sewing adventures with vintage patterns. Sometimes I talk about other things too... but mostly sewing.